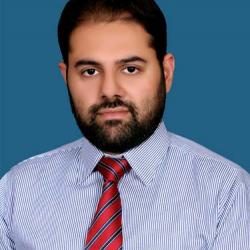 Abdul Jabbar joined ICHEC in March 2018 as a PhD student, digging out the most efficient possible way to process I/O operations for seismic data on HPC clusters for LERO's ExSeisDat project, in close collaboration with DataDirect Networks (DDN).

Abdul Jabbar completed a Bachelor’s in Computer Science from NUCES-FAST, Lahore, Pakistan in 2011. In his Final Year Project, he developed a tool with the MFC Framework with his partners for teaching algorithms/programming called “The Graphical Language Extension of C++“. He went into industry during his graduation, as a front-end (AJAX/JQuery) and back-end (PHP/MYSQL) Web Developer. He played with number of frameworks including Smarty, CodeIgniter and the Yii Framework. After graduating, he pursued a Master’s in Computer Science from NUST-SEECS, Islamabad, Pakistan, in which he explored the field of Parallel/High-Performance Computing. He developed parallel applications for numerical simulation in C and a multi-threaded Client-Server Architecture based Elevator System in Java during his course work. In his research thesis, Abdul Jabbar developed a parallelized, multi-core enabled version of a Matrix Exponential based Solver using C++ and the Intel Cilk Plus shared-memory library on Linux platform, for use in Control Systems Theory and Linear Algebra. His solver achieved sufficient and contributing performance evaluation results compared to the other prominent and state of the art Linear Equation Solvers which led to his research publication in the US based “PDPTA'14” conference.

After the completion of his MS Degree in 2014, Abdul Jabbar pursued a career in teaching at CIIT, Lahore, Pakistan as a Lecturer where he taught Intel x86 Computer Organization and Assembly Language Programming for 3+ years and Operating Systems Concepts. During his tenure at CIIT, he also supervised several Final Year Projects in the area of location-based Android mobile computing apps.