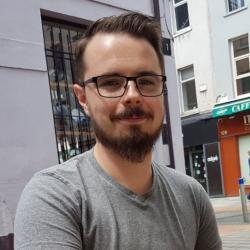 Kenneth obtained his BSc in Physics and Applied Physics from NUI Galway in 2013 and
his PhD titled 'Detection of faint exoplanets in multispectral data' in 2019. During
his PhD he focused on simulation and post-processing of data representative of modern
planet hunters. Using a maximum likelihood approach, he developed a method capable of
detecting exoplanets with a single exposure. Due to the large data sets produced,
particular attention had to given to optimising the simulation and detection pipelines.

In 2018, he joined the AirSea Lab in NUI Galway as a postdoctoral researcher where
he designed and developed robust software control systems and an optimised data
processing pipeline for a bespoke sensor system that measured the sea state in
realtime from a ship at sea.