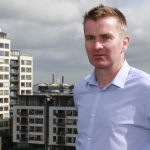 Evercam collaborated with EuroCC Ireland as part of the EuroCC SME Accelerator project.

The goal of this project was to test how HPC can improve the performance of the visual collaboration tools & functionalities currently offered in the Evercam dashboard. During testing and project implementation Evercam relied on access to ICHEC’s High-Performance Computer Kay. Kay has a dedicated GPU cluster with 16 nodes, which are particularly well suited for training and experimenting with deep neural networks at scale, including multi-GPU and multi-node training. Each single HPC GPU node is equipped with 2x 20-core 2.4 GHz Intel Xeon Gold 6148 (Skylake) processors, 192 GiB of RAM, InfiniBand and Ethernet HPC interconnect and 2x NVIDIA Tesla V100 16GB PCIe GPUs. Evercam code was multi-GPU enabled, so it was possible to take advantage of both GPUs during model training on a single node.

For testing and experimentation, Evercam relied on its database of over 2 million annotated construction images collected by cameras placed on various construction sites.

Before starting the project, it was required to understand how ICHEC services work and to get familiar with ICHEC technicalities. Overall, it took almost two months to complete the project.

The task was completed using a deep learning approach. Throughout the process, Evercam team tried models such as SRGAN, ESRGAN, realSR, ESRGANplus, and many others. To verify the visual quality of the images, each of the above models had to be checked separately (mathematical metrics were not sufficient indicators). After checking each model, it was concluded that the ESRGANplus worked best on Evercam’s dataset.

The model was trained on a single HPC node, using 2 NVIDIA Tesla V100 16GB PCIe GPUs. It took almost three weeks to train the final model. In total, ~77.000 Core Hours / ~837 Walltime Hours / ~5 Walltime Weeks of computing time was used for this project. Evercam started training from a pre-trained model that was trained on a small dataset. 10 epochs were taken for training to achieve the peak value. For the full training, Evercam used 2 million images. Approx. 20% of these images were used for the test set validation. The results were sufficient thus, it was not necessary to try different parameters.

Evercam camera and visual communication software is an integrated passive system, where the AI analytics combine the best features of the currently available technology, adding automation and the ease of use. The adoption of HPC and data intelligence technologies allowed Evercam to run tests and draw conclusions on how to further enhance and optimize their core functionalities to continue to help construction teams work smarter and more effectively.

Evercam continually produces the highest quality videos at an affordable cost. As proven in this project combining the most advanced technology available with the appropriate hardware will allow 12MP CCTV camera to produce videos that are equivalent to those produced by IP cameras with an approximate price range of 5x to 10x.

The breakthrough as identified in this project will also help alleviate other problems when working with IP rather that CCTV cameras such as sourcing scarcity along with increased difficulty with integration and management due to bandwidth / HDD usage.

This ability to integrate super-resolution will allow Evercam to produce and deliver higher quality pictures and videos without sacrificing the benefits of full video recording.