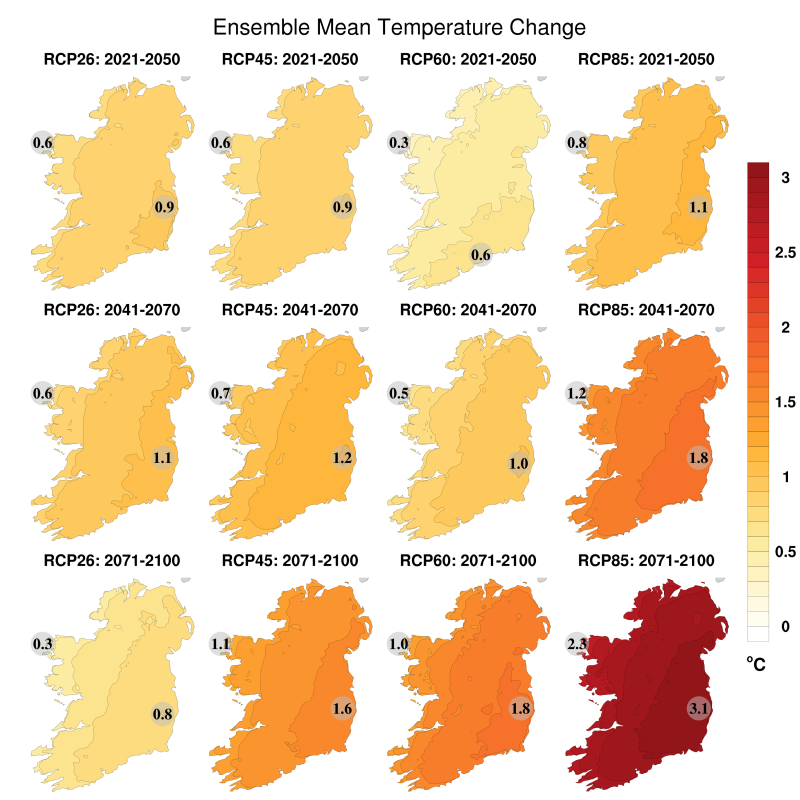 Climate scientists at the Irish Centre for High-End Computing (ICHEC) have completed sophisticated high-resolution (~4km) Regional Climate Model (RCM) simulations for Ireland which predict that by the middle of this century (2041–2060) Ireland will see dramatic changes in climate. The RCM simulations were run at high spatial resolution and are the first systematic study of this kind at this scale. The research was carried out on behalf of the EPA and supported by Met Éireann and the Marine Institute, and presents projections of climate fields and derived variables that are of importance to sectors including agriculture, health, energy, flooding, water management, biodiversity and transport.

ICHEC Climate Scientist and project lead, Dr Paul Nolan, ran an ensemble of RCMs on the national Supercomputer, ‘Kay’ to generate high-resolution climate projection data which allowed for a more detailed assessment of the potential regional and local effects of climate change.

“The models show that the effects of climate change will not be evenly spread across Ireland; the East for example, will see higher overall temperature increases than the West. Furthermore, the fine detail of the models results in a more accurate representation of the climate, and in particular, extreme events such as heavy rainfall, droughts and heatwaves,” he said.

Selected findings from this study indicate that by mid-century (2041–2060):

The research presents projections of additional climate fields and derived variables that are of importance to sectors including agriculture, health, energy, biodiversity and transport.

“Ireland’s climate is changing, our models indicate this is resulting in higher temperatures, changing precipitation patterns and increases in the frequency and intensity of extreme weather events, with these changes expected to continue and intensify into the future. The local climate projections, presented in this report, can assist national policymakers to plan for, and adapt to, the adverse effects of climate change at regional level.

Unlike in the past, where we were relying on aggregate data to indicate global and national impacts, the advances in supercomputing and high-performance computing in recent years mean that we can now carry out more detailed assessments and predict the likely local effects of climate change. Policymakers can benefit from this more detailed data in terms of planning for adverse events such as flooding or drought.”

“This research will inform national climate policy and further the understanding of the potential impacts of climate change in Ireland. Furthermore, the research will inform the climate change adaptation action that various governmental departments and local authorities are mandated to undertake under the National Adaptation Framework (NAF). Previously, downscaled climate datasets produced by ICHEC, have contributed to numerous governmental sectoral adaptation plans; e.g., NAF, agriculture, transport, built & archaeological heritage, water services, biodiversity, health and flooding. It is expected that the updated report, and associated results and dataset, will continue to inform governmental policy”.

Regional climate models (RCMs) were employed to dynamically downscale the coarse information of Global Climate Models (GCMs) to provide detailed projections of 21st-century regional climate change in Ireland. The RCM simulations were run at high spatial resolution (3.8 and 4 km), the first systematic study of its kind at this scale, thus allowing a more accurate evaluation of the local effects of climate change.

“Running an ensemble of regional climate projections is an extremely computationally expensive, and data intensive, task requiring powerful supercomputers. The ICHEC compute and storage resources were essential for completion of the project,” Dr Nolan said.

The report is published as part of the EPA Research Programme 2014–2020. The EPA Research Programme is a Government of Ireland initiative funded by the Department of Communications, Climate Action and Environment. It is administered by the Environmental Protection Agency, which has the statutory function of co-ordinating and promoting environmental research. From April 2019, the research was also funded by Met Éireann and the Marine Institute.

A copy of the report ‘High-Resolution Climate Projections for Ireland - A Multi-model Ensemble Approach’ is available here.