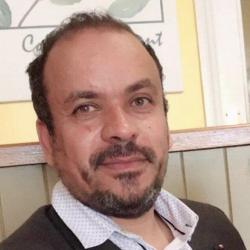 Esmael joins ICHEC as a Machine Learning Data Scientist to work with academic researchers, Irish start-ups and SMEs as a part of the EuroHPC National Competence Centre (EuroCC).

His areas of expertise are in Image Processing & Computer Vision, Machine Learning, and Artificial Intelligence. He has hands-on experience in several Computer Vision techniques, including Object Detection, Object Tracking, Image Classification, Semantic Segmentation, Instance Segmentation, and Human Pose Estimation. Moreover, he is interested in the Internet of Things (IoT) technologies.

From January 2008 to December 2013, he served as a Lecturer Assistant in Electrical and Computer Engineering at the Elmergib University. He also held the head of the Electrical and Computer Engineering Department (2012-2013). While he was pursuing his PhD at the NUI Galway, he worked as a lab supervisor/ instructor in the Electrical & Electronic lab at the undergraduate level ( 2014-2017) and a Lecturer Assistant of Advanced Image Processing at the postgraduate level ( 2018-2019). From June 2019 to December 2020, he served as Postdoctoral Research Fellow in ADAPT Centre at the Trinity College Dublin(TCD). While there, he worked on several Computer Vision and Machine Learning projects, including Building Change Detection in Aerial Images, 3D Humane Pose Estimation, and Image/video stitching techniques.