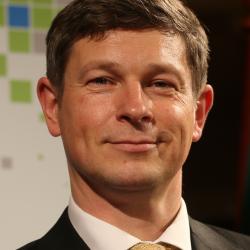 Jean-Christophe "JC" Desplat is a technology expert with over 25 years' experience in high-performance computing (HPC). His particular interest lies in the innovative use of HPC technologies in emerging domains. He has served as advisor to a number of committees in Ireland and abroad, including the strategic advisory team of the UK Engineering and Physical Sciences Research Council (EPSRC), the ICT sub-committee of the Irish Medical Council, the Climate Change Research Co-ordination Committee of the Irish Environmental Protection Agency (EPA) as well as the scientific board and the infrastructure advisory board of the IT for Innovations national centre in the Czech Republic. JC is also the national representative for Ireland on the Partnership for Advanced Computing in Europe (PRACE) AISBL Council since 2010.

See "The subtle power of high-performance computing" (Silicon Republic, June 2016) and "Research lives: In the vanguard of the computing revolution" (Irish Times, June 2016) for further information.

JC's primary degree is a Diplôme universitaire de technologie (DUT) in Mesures Physiques from the Université de Bordeaux I (France). He later studied for his degree at Sheffield Hallam University in the UK where he gained a BSc (hons) in Instrumentation and Measurements, and later received a PhD for his work on "Monte Carlo simulations of amphiphilic systems"  carried out at the Materials Research institute in 1996.

JC joined the Edinburgh Parallel Computing Centre (EPCC) at the University of Edinburgh in 1995 as an applications scientist for the EC-funded Training & Research on Advanced Computing Systems (TRACS) programme. JC worked nearly 10 years at EPCC, during which time he took part in a number of projects and activities ranging from user support for the UK national HPC service, collaborative research, teaching at post-graduate level and research student supervision, software development, development and co-ordination of large European programmes.

The highlights of these ten years include his involvement in Professor Michael E. Cates' research group for whom he co-developed the parallel generalised Lattice-Boltzmann code "Ludwig" (see publications highlight below), as well as negotiating and setting up EPCC's involvement in the Distributed European Infrastructure for Supercomputing Applications (DEISA) and HPC-Europa projects.

JC joined the Irish Centre for High-End Computing (ICHEC) in June 2005 as Technical Manager (and employee #5) and later became Associate Director (July 2007) and Director (May 2012). His expertise has proven crucial in establishing ICHEC as one of the leading high-performance and technical computing centres in Europe with an impressive track record of industry engagement and public competitive funding, and scaling up the Centre from six to its current size of c. 40 employees.

Further funding (c. €3M) was raised through the Centre's  industry engagement programme, both directly as industry cash and through Enterprise Ireland's Innovation programmes.

J-C holds the position of Honorary Professor of Computational Science at the Dublin Institute for Advanced Studies (DIAS) since 2008, and of Adjunct Professor in the School of Physics at NUI Galway since 2012. He was also a member of the Digital Humanities Observatory (DHO) Management Board (2008-2012), of the Environmental Protection Agency (EPA) Climate Change Coordination Committee (2008-2013). He also was a member of the ICT Sub-Committee of the Irish Medical Council (2011-2013) and the UK Engineering and Physical Sciences Research Council (EPSRC) Research Infrastructure Strategic Advisory Team (2012-2015). More recently, JC joined the scientific board and the infrastructure advisory board of the IT for Innovations national centre in the Czech Republic (2016-).

JC was awarded the distinction of Chevalier de l'Ordre des Palmes Académiques by the French Government in 2016.

He is interested in photography (and in particular macro photo), restoration of old European motorbikes BMW R25/2 and R27, Moto Guzzi 850 GT and 250TS. He loves French wine (favourite is Pomerol) and Scottish whisky. He is also a passionate environmentalist.