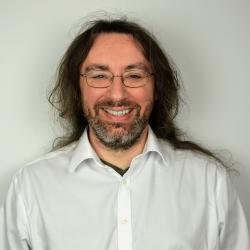 Oisín graduated from University College Dublin with a Masters in Mathematical Science by Research in December 2015.  His Masters dissertation, "A New Implementation of the Elliptic Curve Method of Integer Factorisation using Edwards and Hessian Curves" provided subject matter and practical results (obtained via Fionn) for a paper [1] accepted to ANTS XII, the twelfth bi-annual Algorithmic Number Theory Symposium.  Oisín also presented a poster at ANTS XII on polynomial multiplication [2].

The degree followed a higher diploma in Mathematical Science, also from UCD, graduating in 2014.

With the structures studied in mathematics being of a fundamental nature, and with a solid grounding in this area, Oisín brings insights arising from this kind of knowledge that may be effectively applied in high performance computing.

Oisín is a member of the ESCAPE project, a European consortium aimed at improving computational efficiency of Numerical Weather Prediction (NWP) models, using paradigms such as vectorisation and parallelisation, both of which have seen recent technological advances which may be brought to bear on this goal.  The ultimate aim is to realise NWP at exascale.

Oisín also holds a degree in Electronic Engineering from UCD, and an M.Phil in Music and Media Technologies from Trinity College Dublin.

Aside from algebraic number theory, Oisin is currently interested in improving his chess game, and is a keen guitar player.